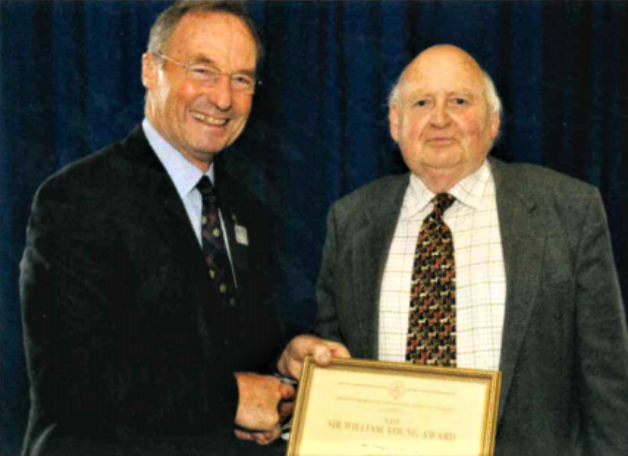 It is difficult to relate the story of Dougal’s life without also referring his family’s Transy Pony Stud, which was founded in 1896 by his grandfather, William Mungall, on the purchase of two unregistered Shetland pony geldings for his Transy Estate on the outskirts of Dunfermline, Fife. His purchase would soon become a passion for the breed and four generations on it remains strong through his daughter Eleanor and her husband William Dick, grandson Dougal and great-grandchildren Carolyn and Sarah, who became partners with Dougal in 1988. Dougal’s hope that another generation will be added to the list in due course seems assured as his own grandchildren have already shown an interest in the Stud.

At a time when breed societies and stud books were developing rapidly, his family played a prominent role for over a century, all having been elected to Council of the Shetland Pony Stud Book Society with Presidency awarded to William Mungall in 1909, to William Dick (Dougal’s father) in 1959 and to Dougal himself from 1969 to 1971 and again from 1999 to 2000. Dougal has been a member of the Shetland Pony International Show and Centenary Show Committees as well as the Centenary Trust. The Shetland Pony Stud Book Society was not the only pony society to benefit from Dougal’s leadership as he was also Scottish Chairman National Pony Society (1975-2000), National Pony Society Council member and President (1989-90), founder member Scottish Equine Breeders Association and Chairman (1999-2003) and Chairman of the Scottish Connemara Group.

Dougal took over the breeding of ponies at Transy in 1953 having persuaded his parents to bring back to the Stud six of the remaining mares which had been out on loan to the Harviestoun and Marshwood Studs during the war when the Dick’s farm at Lochend had been requisitioned as a remount depot for the army. It was at much the same time that Dougal was actively engaged in sporting activities including sailing and cricket however it was both hockey and curling at which he excelled and played competitively for local clubs. It was later in life that he pursued the more leisurely hobby of photography, something which he had inherited from both father and grandfather who were both keen amateur photographers in their day.

Following his father’s advice to dismiss options for Oxford or Cambridge, Dougal studied agriculture at the East and West Colleges of Agriculture choosing to return home to run the farms on Transy Estate. Although better known as a Shetland pony breeder, he maintained his interest in farming and having sold his farms at Lochend and Dunnygask near Dunfermline, he moved to Devonshaw in Clackmannanshire in 1969 where sheep became the focus along with cattle and ponies. His interest in agriculture never faded and Dougal always had a view on how Scottish farm land should be managed. His ties with the Transy Estate came to an end in 1989 when it was sold following the death of his mother.

Dougal saw the Transy Stud through its centenary year when he hosted a memorable gathering at Devonshaw in 1996 and the publication of its history which he painstakingly compiled with words and photographs from his extensive library. Bloodlines from the early purchases by William Mungall in 1899 had been proudly maintained and still remain in the pedigree of ponies currently in the Stud. From Mungall’s early domination of the Royal Highland Show championships in the first part of the 20th century, Dougal won his first prize at Perth Show in 1939 when he won with the barren mare Skelmore of Transy. He has since upheld a keen interest in shows and has successfully competed throughout Britain and Europe. Among his many big wins, the Highland Show Championship and Medal won in 2002 with Ceres of Transy was considered by Dougal as his greatest accomplishment in the show ring as it followed a lengthy gap since the Stud had taken the title and his very own first at Scotland’s premier event.

Much success has since followed and in 2010 the Royal Highland & Agricultural Society of Scotland recognised his outstanding contribution to livestock breeding by awarding him the prestigious Sir William Young Award. It is no wonder as he also exported ponies to all corners of the world including Continental Europe as well as both North and South America, Egypt and Japan making the Transy prefix a key constituent of Shetland pony breeding policies universal.

While latterly Dougal’s interests have mainly rested with the showing of his Shetlands in breed classes, over the years he has been a great supporter of all performance aspects of the breed with successes recorded with ponies both under saddle and in harness. This probably explains why in discussion with Dougal on the merits or demerits of conformation, hind legs, active action behind and good movement have always featured as a priority with him. In time he was invited to join the Shetland Pony panel of judges in 1959 and judged his first show at Echt that year. Following his first major judging appointment in 1967 when he judged the Royal Show, he went on to judge every major show in the country as well as extensively overseas. In addition to the Shetland panel he has also been a panel judge for the British Driving Society, the British Connemara Society and the National Pony Society for which he was an authority on all native breeds. It is a little known fact that Dougal also bred a few Dartmoor and Connemara ponies at Transy, two breeds which he had previously selected for his children to ride as they outgrew their Shetlands. Even less known is the fact that he also stood a Thoroughbred stallion for many years which was popular with breeders in Central Scotland.

It goes without saying that Dougal’s dedication to public duty knew no bounds. He was one of the willing volunteers of life, generous of his time, his knowledge, his experience and his enthusiasm; he was also a very generous sponsor from which many good causes benefited. He will be remembered as a wonderful host to the many hundreds, if not thousands, of people who enjoyed his hospitality at Devonshaw. Dougal’s passion for the Shetland breed and ponies in general never faltered and until very recently his lack of mobility never stopped him from attending shows and events.

While I am sure Dougal’s recognition as a successful breeder and exhibitor are well earned, these go nothing towards describing the man known affectionately so many people both in his locality and world-wide. He would have been the first to recognise the life-long friendships which he established through the Shetland breed or horses and ponies in general. While Dougal didn’t suffer fools gladly; his likable character, interesting conversation, good nature and wicked sense of humour made him easy and enjoyable company, something which he generously shared.

Dougal was a great family man having married Katherine in 1963; although divorced they remained friends to the end. He was immensely proud of their daughters Carolyn and Sarah and encouraged their interest in competitive riding as well as breeding and showing Transy ponies. Their respective husbands James and Ian have become backroom boys at Transy and their children Charlotte, Matthew, Sophie and Lucy have begun to play a key role. Sincere condolences are extended to them all.

Get in touch with us